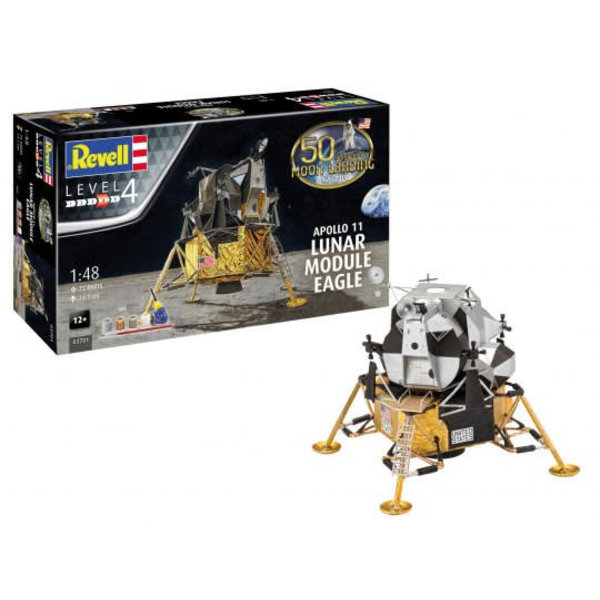 A lovely all plastic kit for all ages. This edition is a re-issue of the Dragon kit that was issued in 2011, using some modern slide-moulding technology to provide detail not feasible back in the 1960's for Revell's original issue. The rendition of the gold-coloured Kapton foil on the lower part of the capsule is just amazing, and will of course need to be painted by the modeler [ in the original Dragon issue, this area came pre-painted ]. The kit comes with paint, glue & a brush, but most modelers will require more variety of tools & fluids to complete this model to their satisfaction. A terrific kit & highly recommended !

The original Revell kit of the Lunar Lander was issued back in 1968 & has enjoyed many re-issues over the years. It is a decent kit & has much to offer for the space enthusiast, including a base and astronaut figures. I have seen some fine builds of this kit & also recommend it to the budding fanatic. Monogram also issued a Lunar Lander in 1970, but this is a different mold! It too has a base & astronaut figures, but also gives you some scientific equipment to put on the base. This original 1970 Monogram mold was also re-issued in 2019 under the MONOGRAM brand [as catalog no.85-5094] also celebrating the 50th Anniversary of the moon landings. The Revell kit has not been re-issued since 2009, although it may have been included as part of a set in 2011.

Revell, Revell Germany & Monogram have been around for decades & are deeply inter-connected. They have established good terms with many other manufacturers around the world, allowing for much sharing of molds between them. Did you know that Bandai re-issued the Monogram Lunar Lander in 1978 for the Japanese market ? Probably not, and you probably didn't care. Only twits like me like to know these things, we like to track the path of a kit & see where it ends up. Guys like me are called 'kitologists' & we spend more time studying kits than actually building them ! Thanks to websites like SCALEMATES our lives are made easier, but there is much work ahead of us. There is still a lot of 'unknown' out there! It is good to know the history of a kit,new or old, before you make a purchase-   or else you may buy a Tamiya kit off of ebay ,crack it open and be pooched to find an Italeri kit inside! Before you file a dispute with the seller, you may want to go on Scalemates first & find out to your chagrin that the boxing you bought is in fact, totally legit ! A little bit of 'kitology' will aid you in your modeling endeavours, trust me !