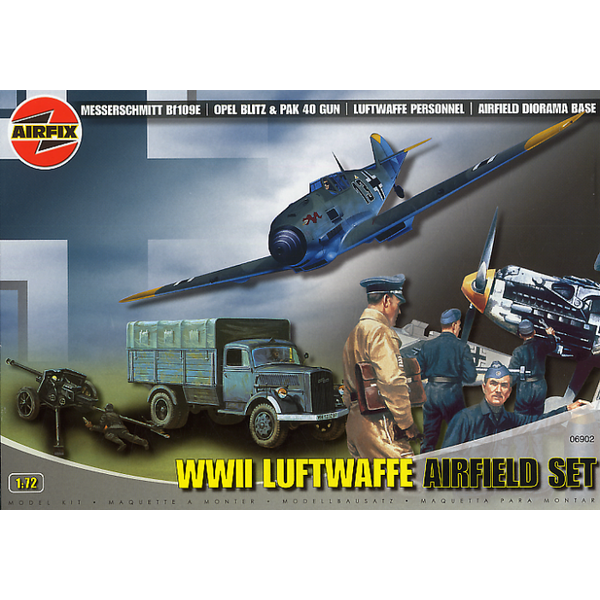 This is the second issue of this little set, being issued in 2008 & discontinued circa 2010. The set contains the old tool Bf109E from 1975, the Opel Blitz & Pak 40 from 1980 [in 1/76 scale] & the Luftwaffe Personnel set from 1977. Also included is a vacuform base on which to place all this lovely stuff ! I expect that Airfix will never re-issue this kit in this exact form in the future as they have now fully re-tooled their Bf109E kit to modern standards, making the 1975 mold a collector's piece.

Airfix has a long history of issuing playsets & dioramas and some of their 1970's issues can be considered classics. Some of the later re-issues of these sets did not include all of the parts that the originals had, such as the vacuform bases. This basic little set is not a re-issue of a 1970's edition, but a re-boxing of a set first issued in 2006 & it includes the vacuform base of that first issue. It is a simple thing but it ties the group together. Along with this base & the 1975 mold of the Bf109E, you can relive the 1970's experience of putting one of these diorama kits together once again! This is entry level stuff & a fun set for any newbie who wants to try his/her hand at building a diorama scene for the first time.