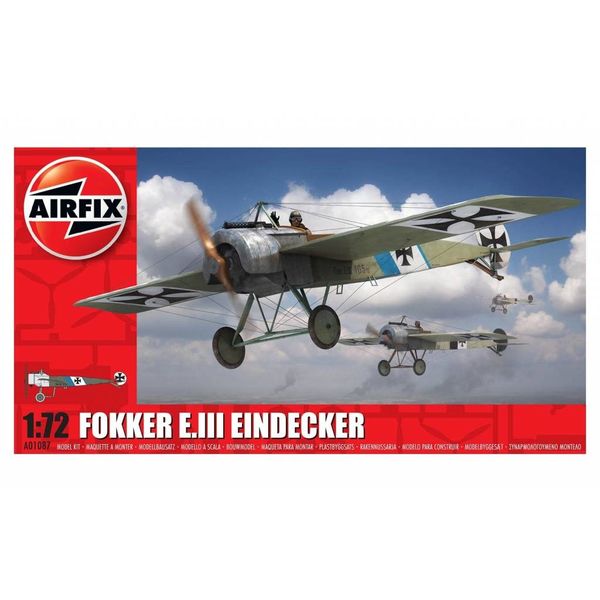 This was the major production version of the Fokker Eindecker, the E.III was given new wings & bigger fuel tank and arrived at the front in sufficient numbers to form specialist fighter units [earlier versions had operated singly] which precipitated the 'Fokker Scourge' on the western front, beginning July 1915. Primarily operated by 'Der Fliegertruppe' [the air arm of the Imperial German Army ], it was also used by Austro-Hungary,Turkey & Bulgaria. Geez, you should know all this stuff-I should not be the one telling you!

Outstanding plastic kit, this issue follows the Eindecker E.II issued previously, now as an E.III. In reality, the E.III had newly designed wings that were slightly narrower and a much bigger fuel tank behind the cockpit, differences that you can not easily detect in 1/72 scale, thus allowing Airfix to issue their kit in both E.II & E.III versions. I am sure there are a few fanatics out there losing sleep about this lapse in accuracy !

A lovely plastic kit for all ages, only becoming a problem when you try to rig the darn thing !