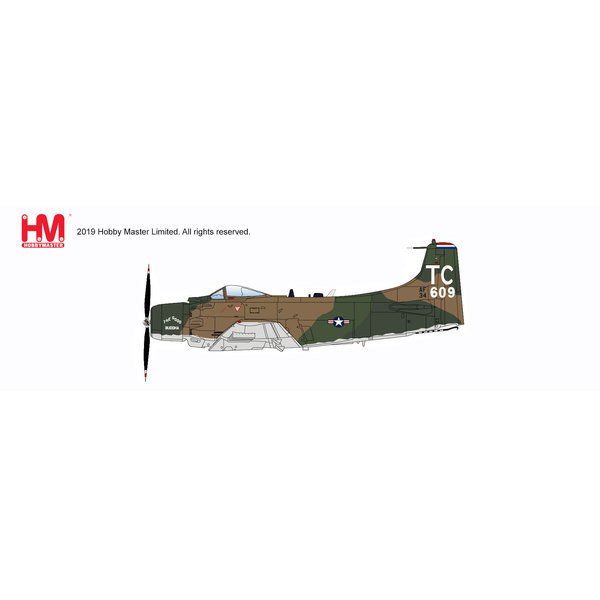 The A-1 Skyraider originated as a carrier-based torpedo and dive bomber. Deliveries as the AD-1 to the Navy began in November 1946 and in 1962 was renamed A-1. It was the first single-seat torpedo/dive bomber to serve with the Navy. The primary mission of the A-1 was close air support for ground troops because of its heavy ordnance load and accuracy. The aircraft had great success in Korea and Vietnam. There were 3,180 Skyraiders built in seven major models and 28 different versions. There were 266 A-1s lost in Vietnam.

Originally called the 1st Air Commando Squadron they served two tours during the Vietnam War, July 8, 1963 until November 7, 1972 with the second tour taking place from December 15, 1972 until January 28, 1973. In August 1968 they were re-designated the 1st SOS. During their tours the 1st SOS flew 4 types of aircraft with the Douglas A-1H Skyraider being the final. Based at Nakhon Phanom RTAFB their primary mission was interdiction flights over the Ho Chi Minh Trail and supporting pilot rescues as well as training South Vietnam pilots counter-insurgency operations.